This is to inform you that the CoMSAA Annual General Meeting will be scheduled for the 7th of October (Tuesday) at 2.00pm. The venue is tentatively planned to be the SLMA auditorium.

The notice and application form for Office Bearers and Executive Committee Members 2014/2015 are attached. 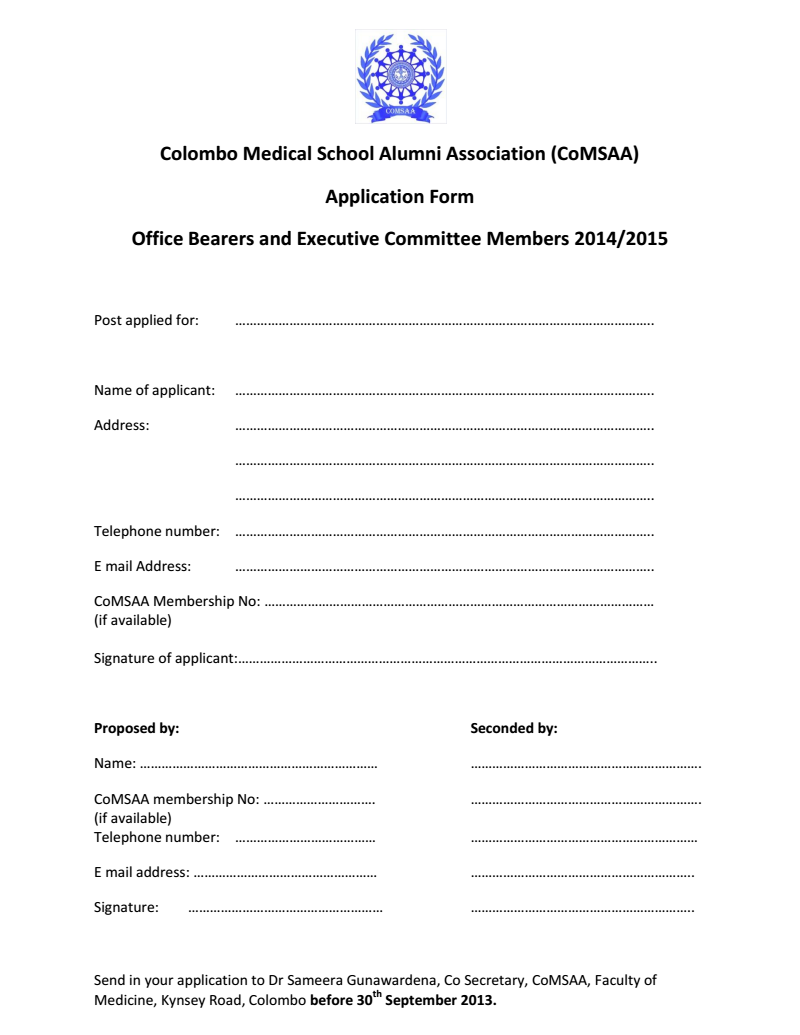 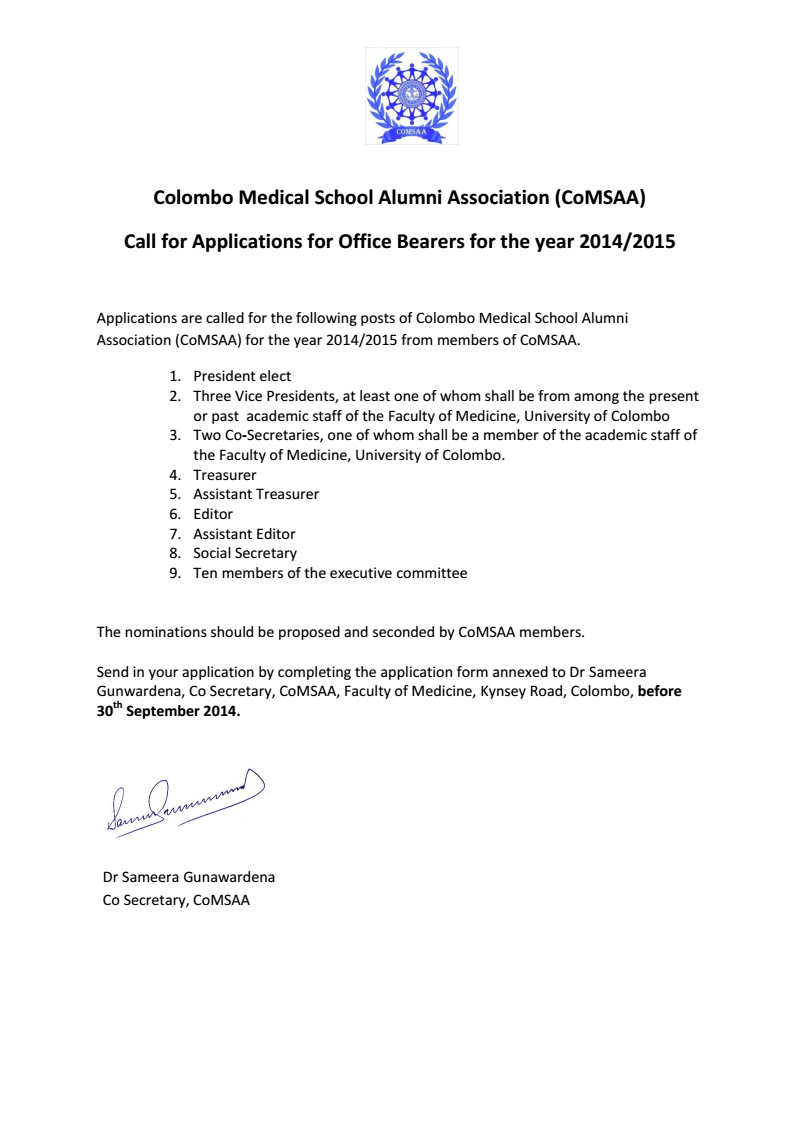 The Annual Scientific Sessions of the College of Community Physicians of Sri Lanka (CCPSL) were held at the Grand Crystal Ballroom of Hotel Taj Samudra from 18 to 20 September 2014. The annual event concluded with the College Dinner on Sunday 21 September 2014 at On Golden Pond of the same hotel. 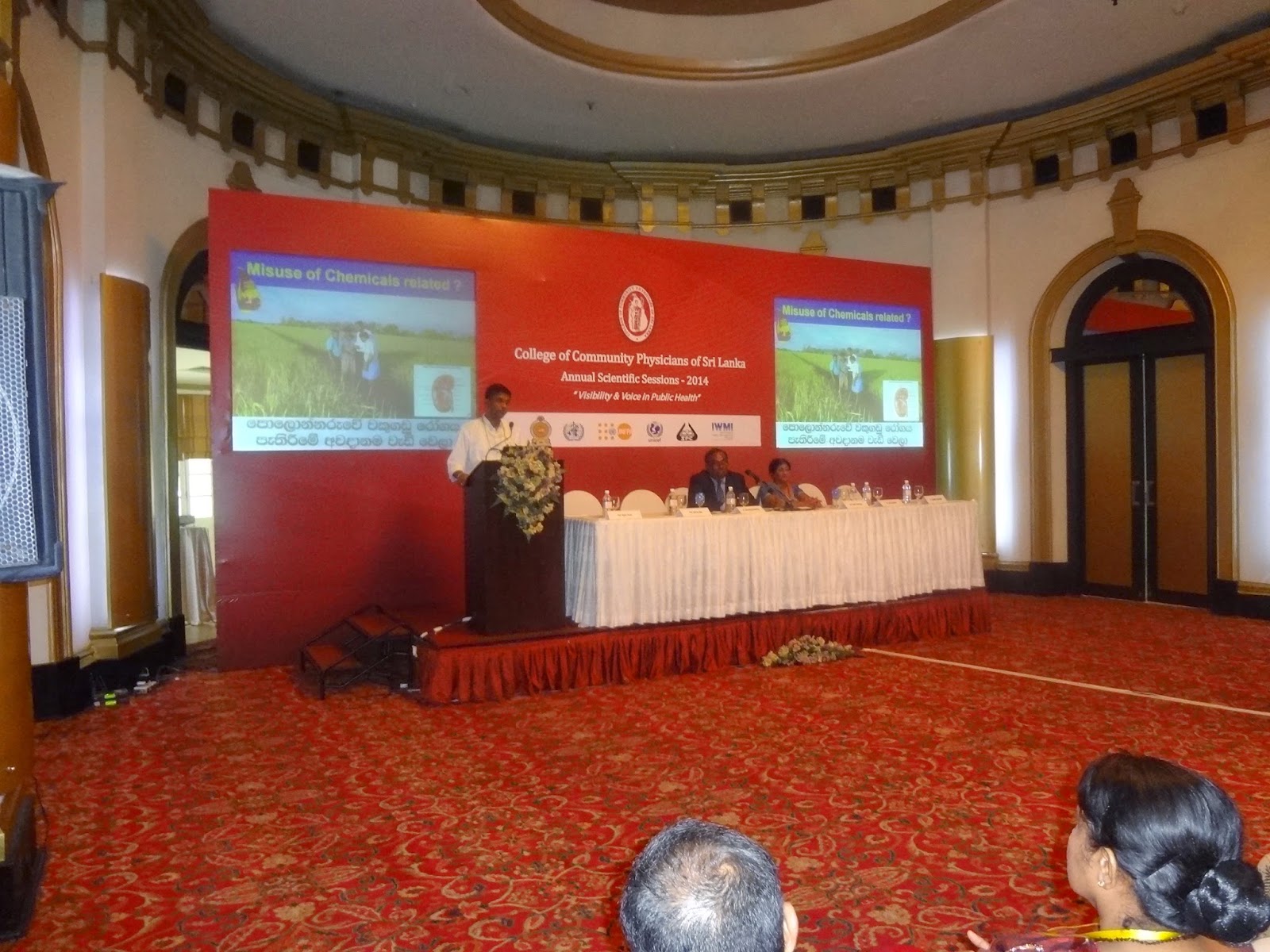 The ceremonial inauguration took place on Thursday 18 September under the distinguished patronage of Dr. P.B. Jayasundera, Secretary to the Treasury. He was welcomed by the incumbent President of the College Dr. Paba Palihawadana who is the Chief Epidemiologist of the Ministry of Health.. This was followed by the College Oration which was delivered by Professor Nalika Gunawardene, Professor in Community Medicine at the Faculty of Medicine, Colombo. At the conclusion of the sessions, the Annual General Meeting of the CCPSL was held where Dr. Sandamalee de Silva, Deputy Director of the Family Health Bureau was elected President for the ensuing year.
I have inserted below a few photos taken at the College Dinner. These pictures were taken with my camera phone and accounts for the poor quality. 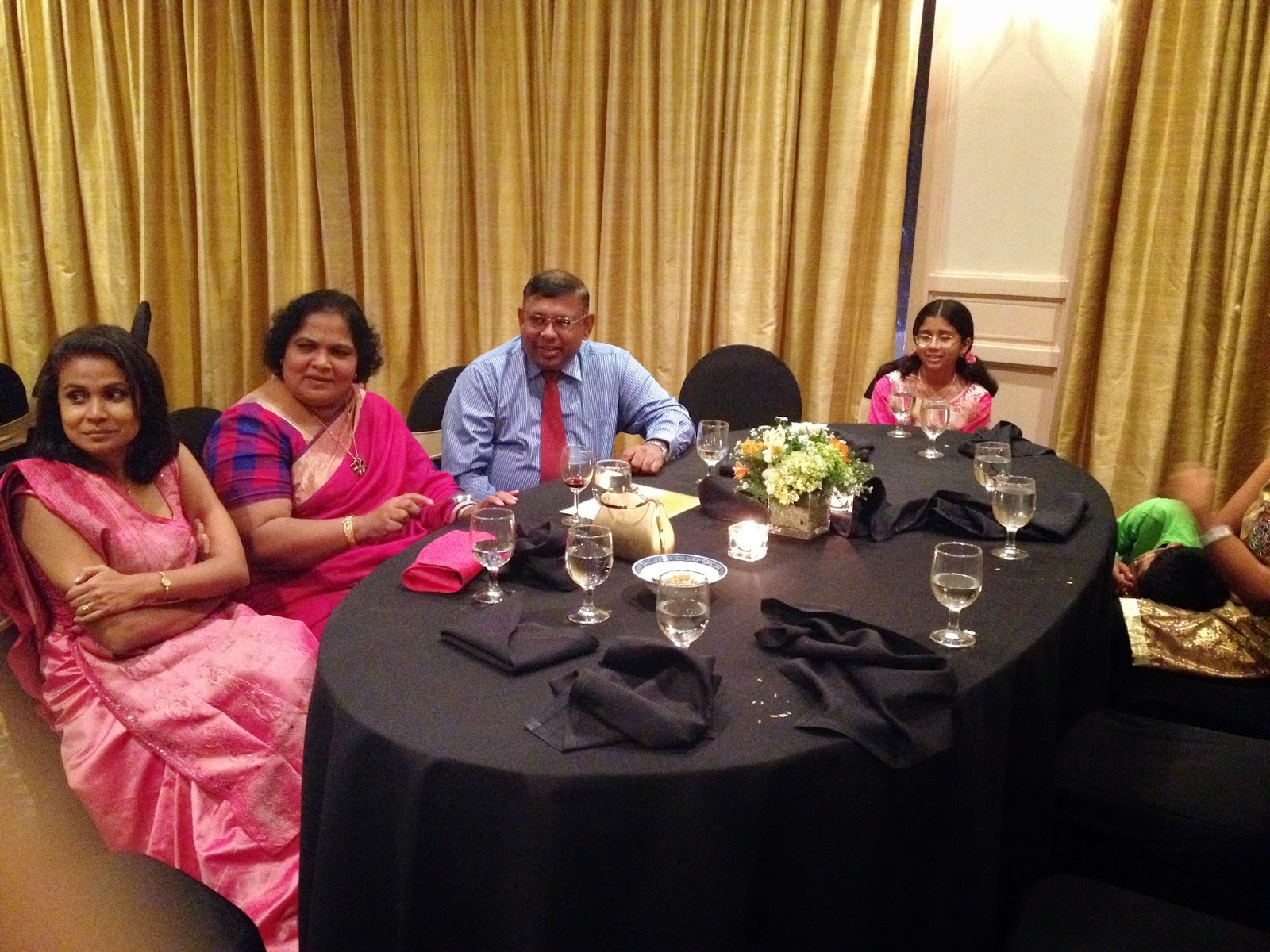 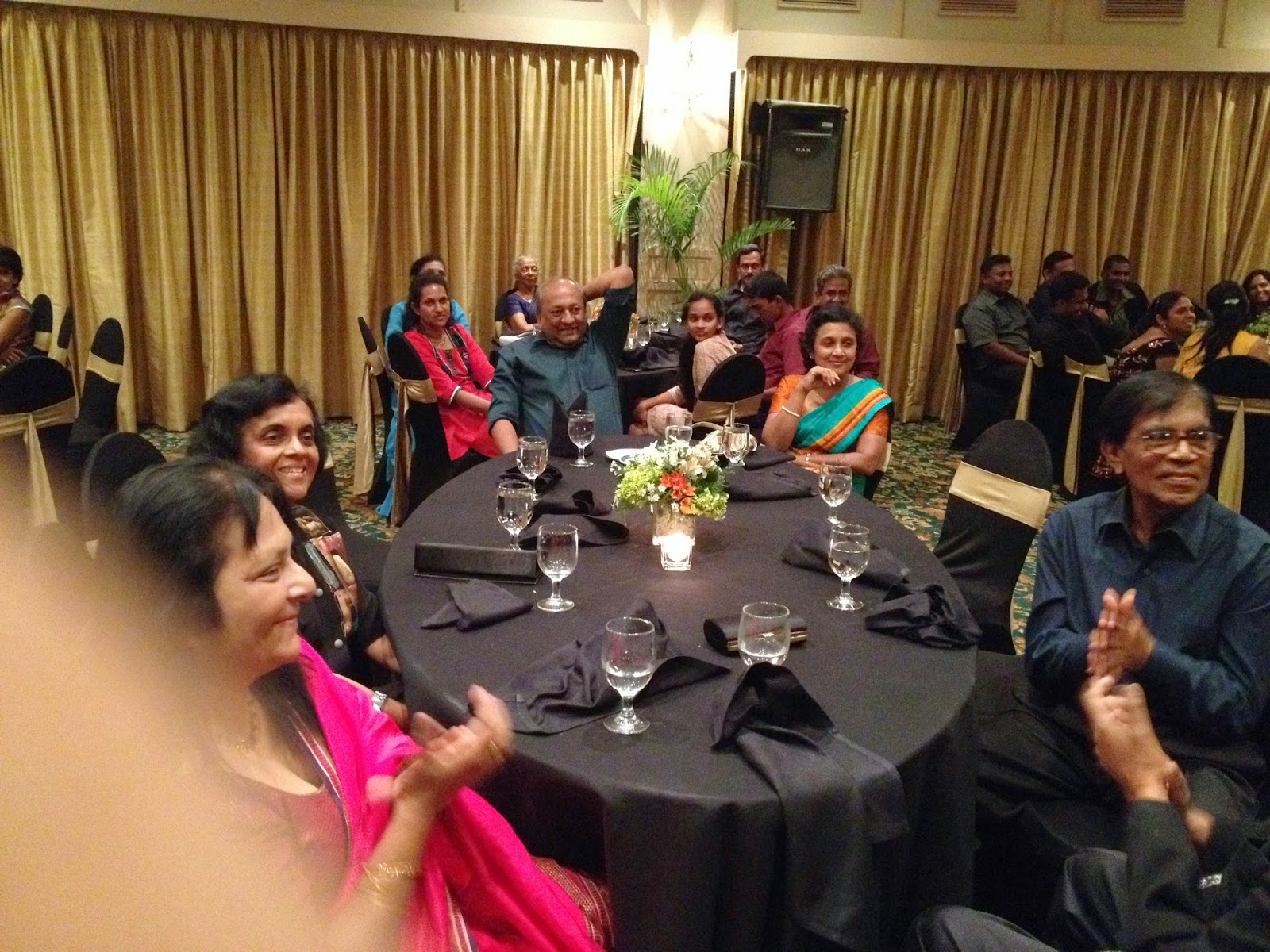 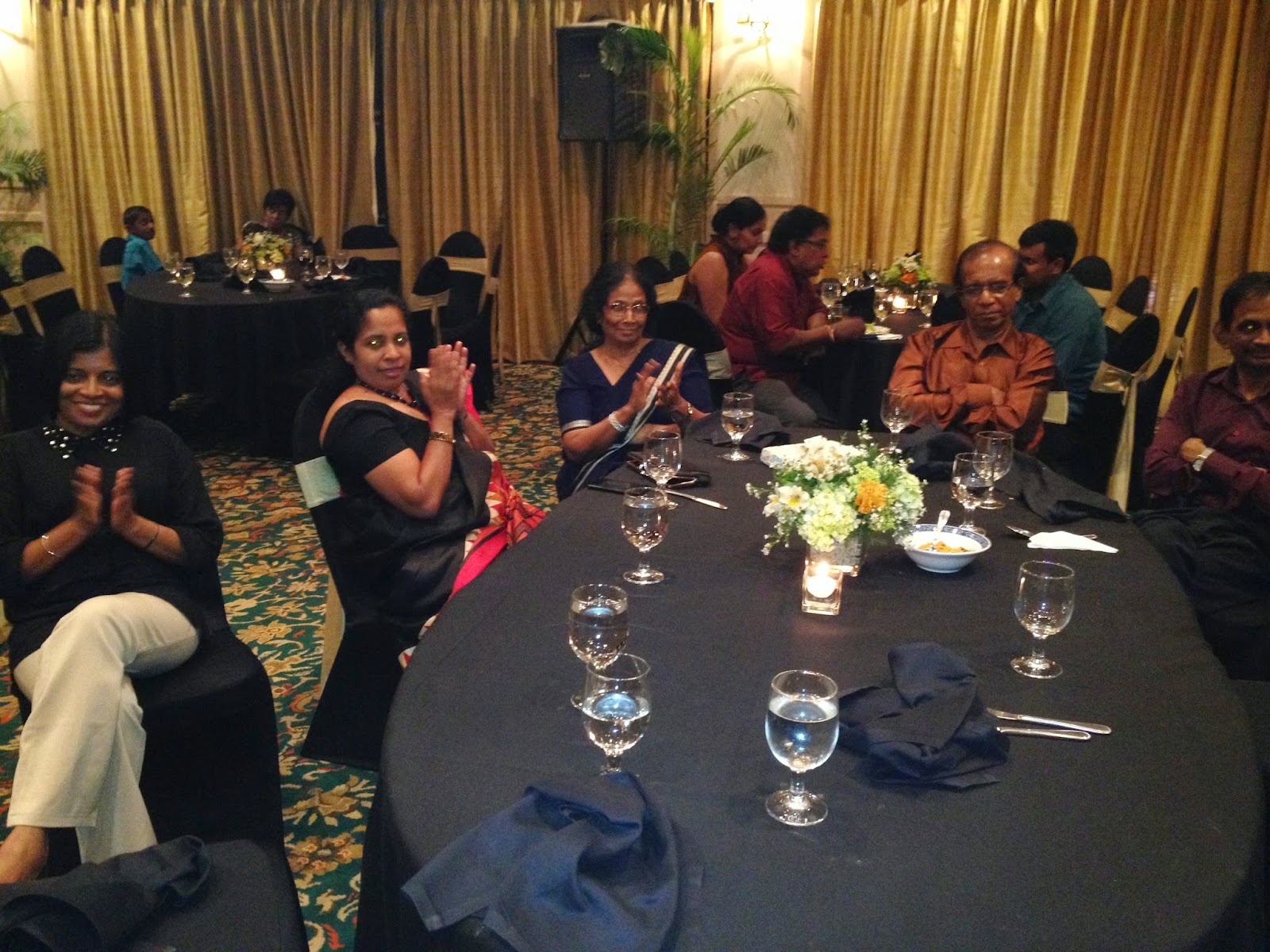 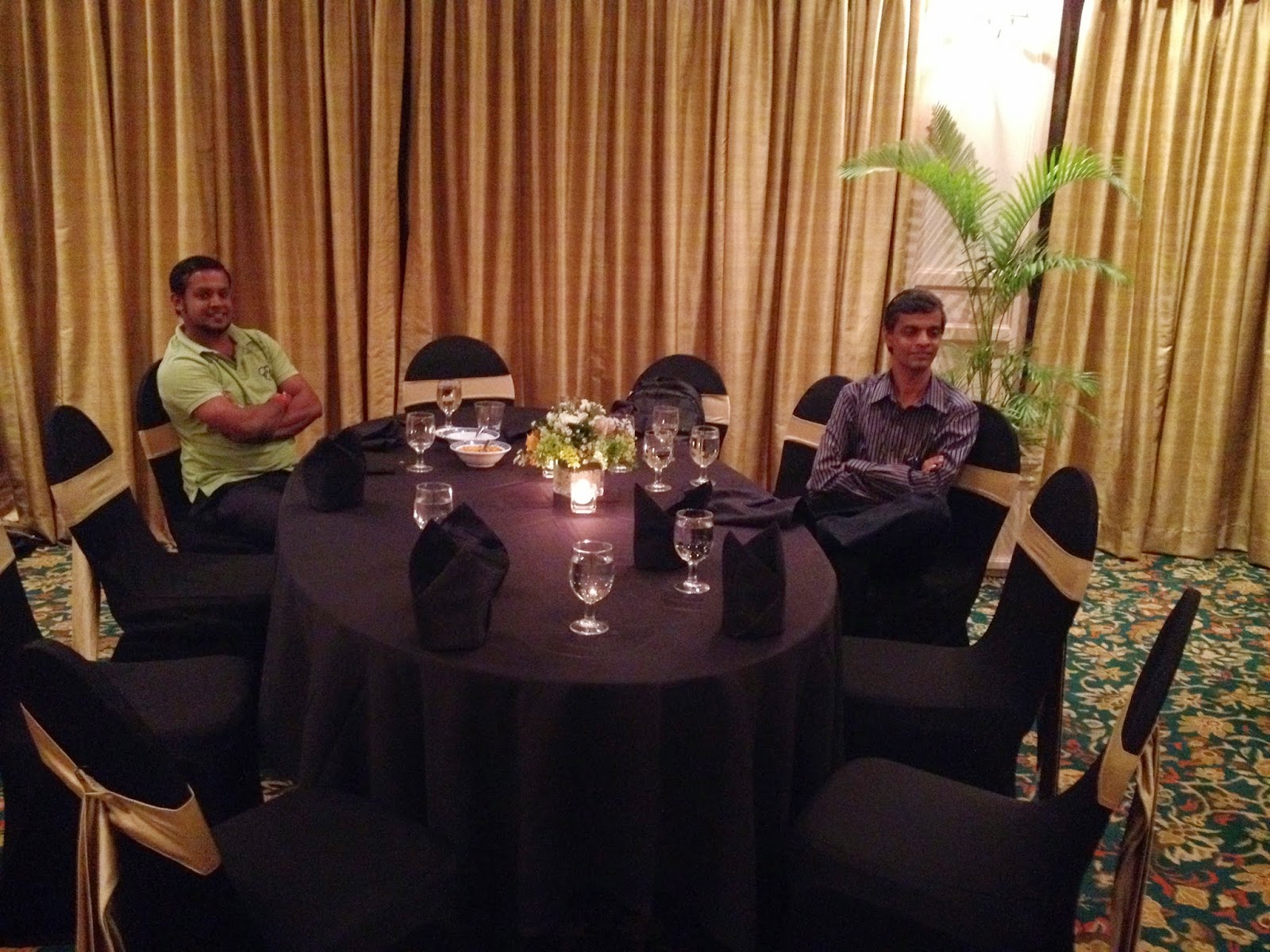 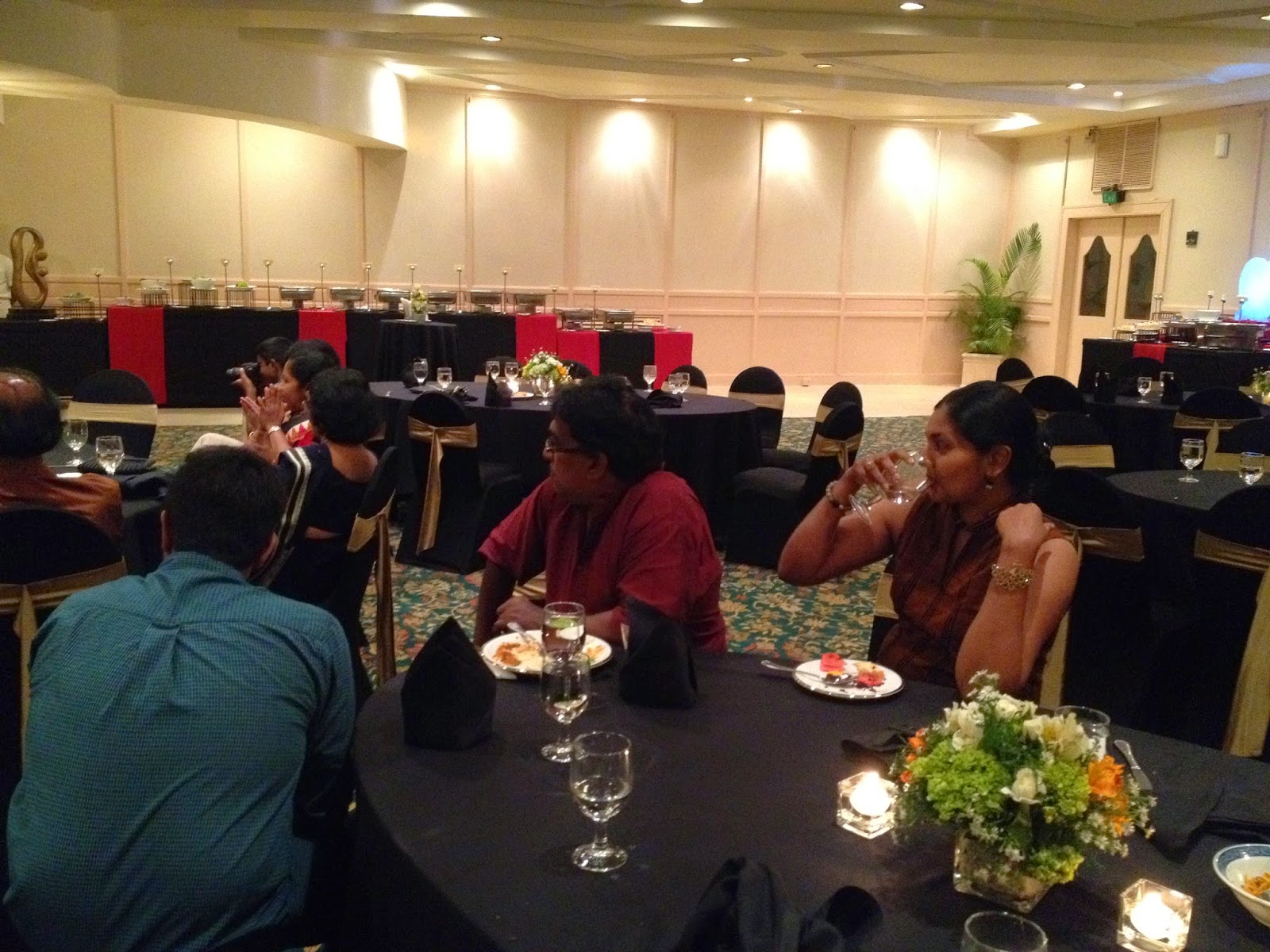 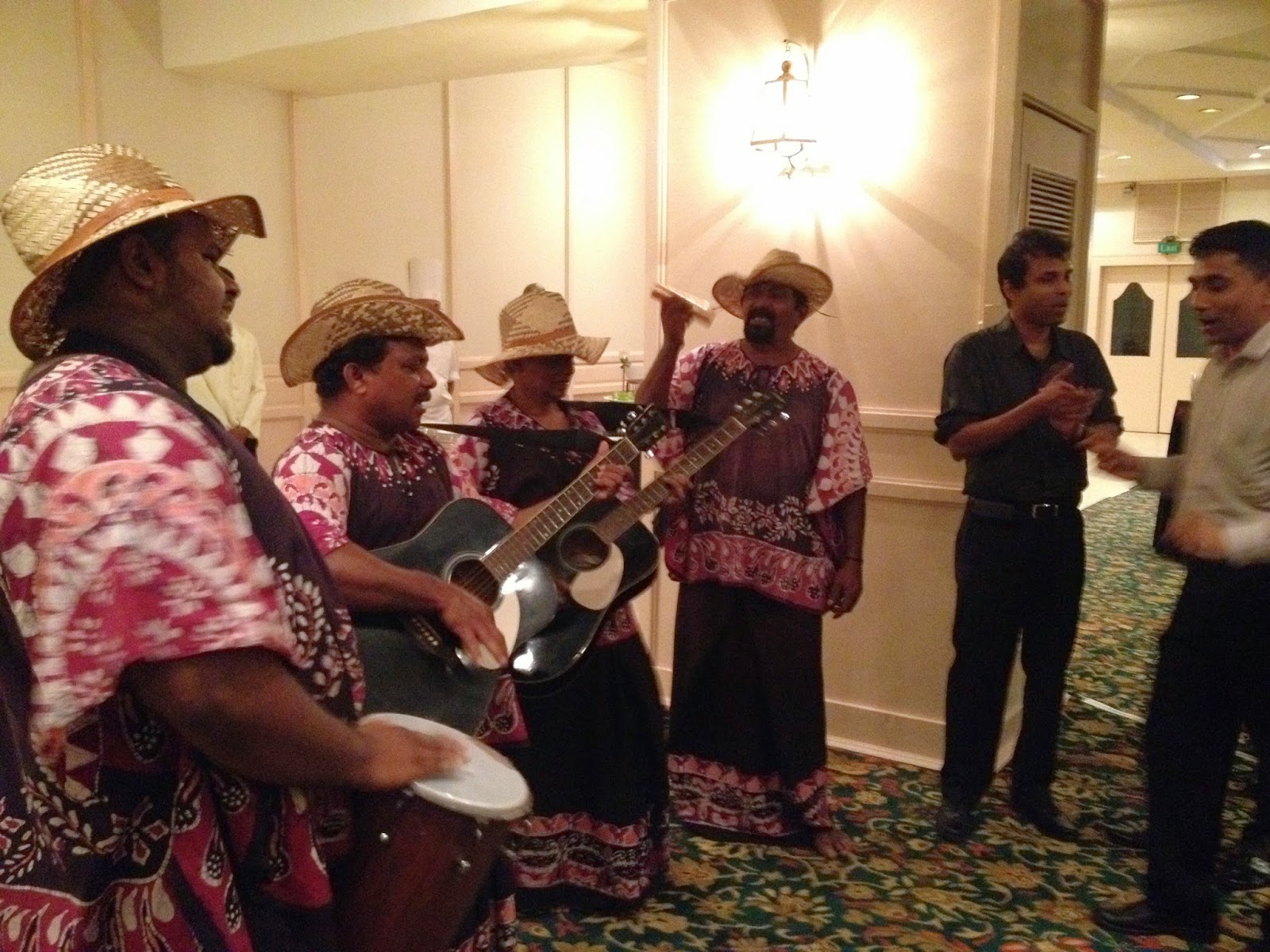 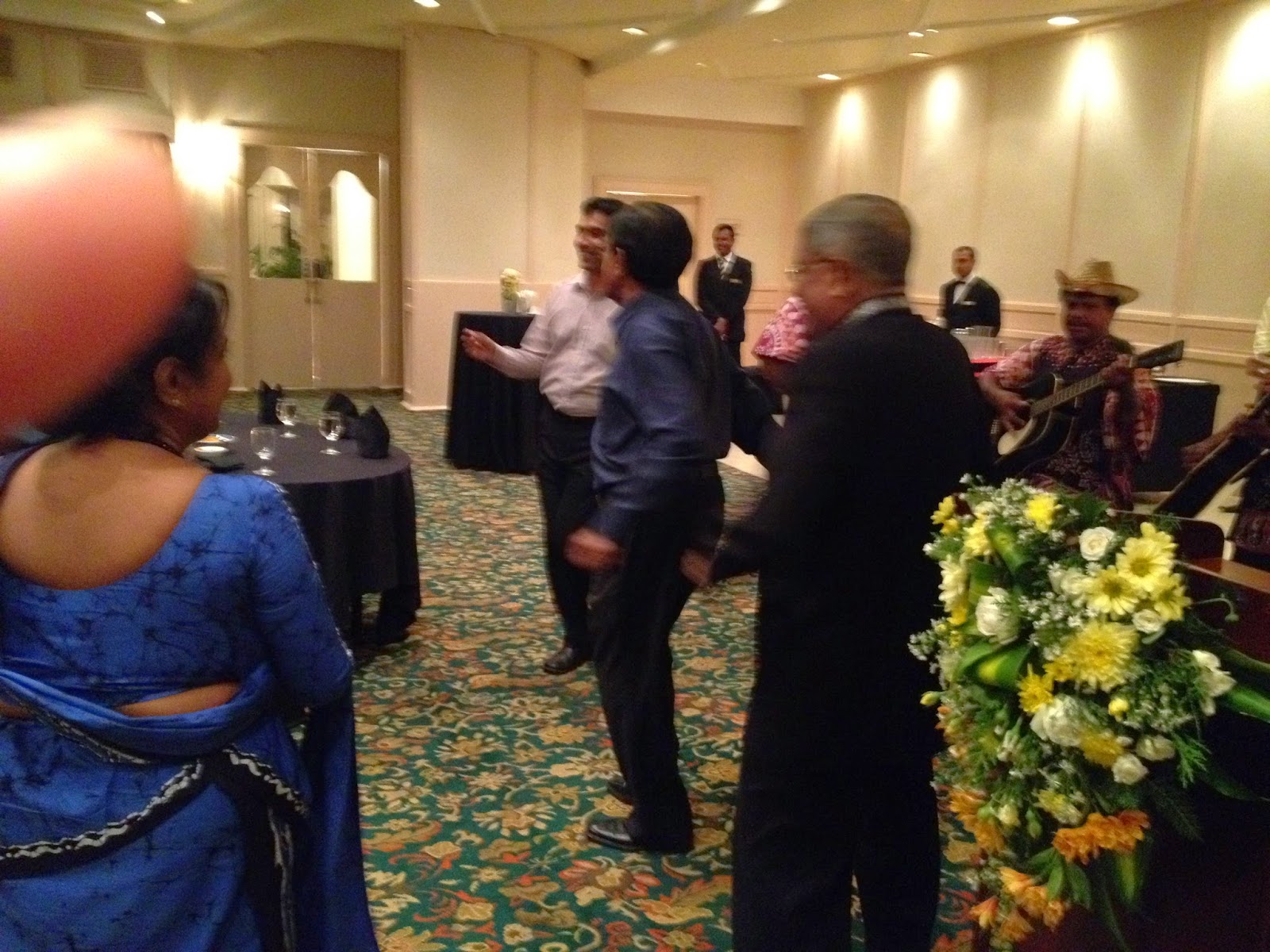 Email ThisBlogThis!Share to TwitterShare to FacebookShare to Pinterest
Labels: College of Community Physicians 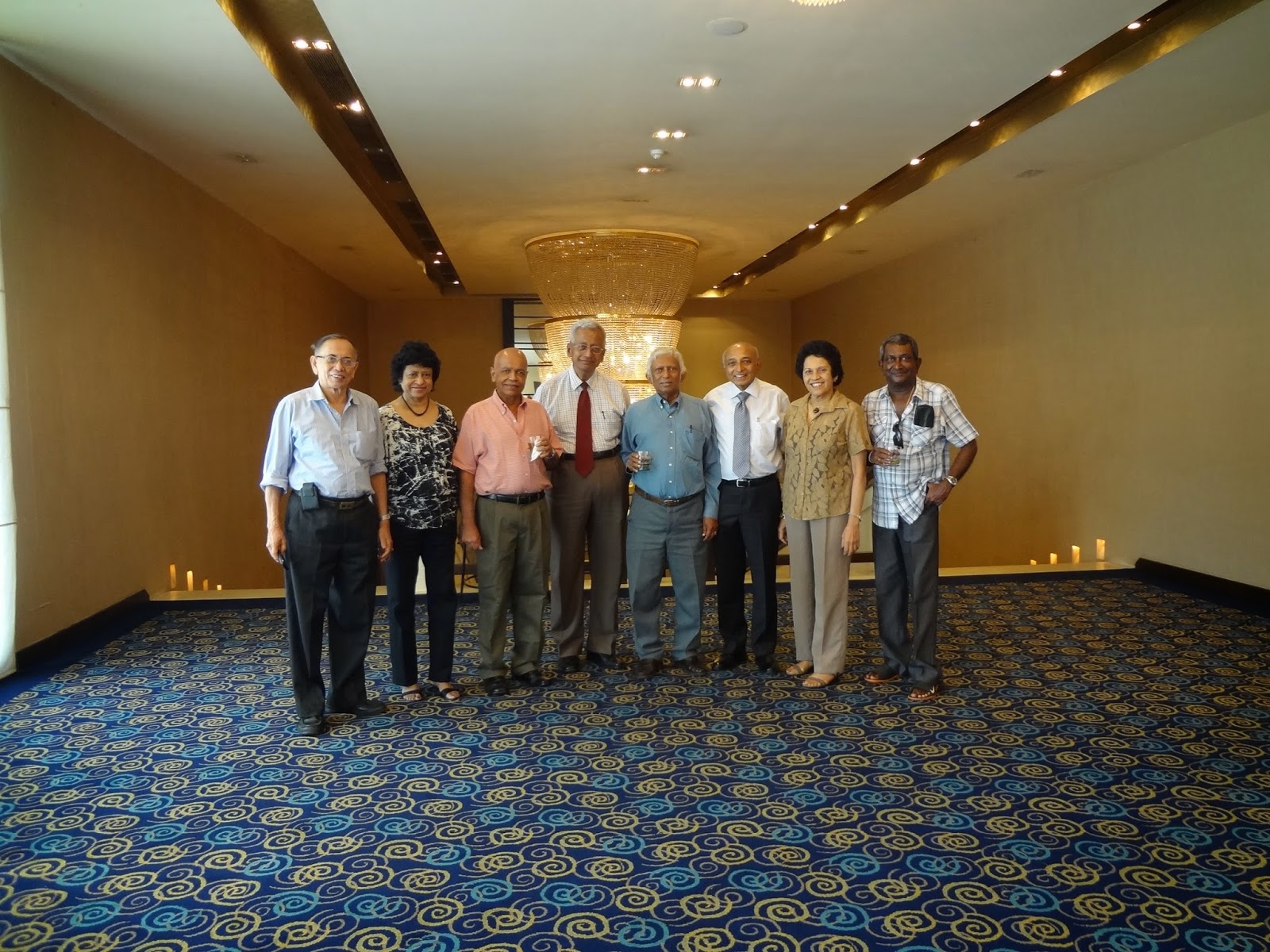 
Please click on the following link to see the complete album of pictures from the CoMSAA Reunion & Academic Sessions held on 7 September 2014 at The Blue Water, Wadduwa, Sri Lanka.
http://www.shutterfly.com/share/received/welcome.sfly?sid=2AbuXDFo5YslHZk
(If the slide show does not work, click on the first picture and see one by one following the arrow)
Some alumni with their families were at the hotel from Saturday 6 September evening. First few pictures are from Saturday evening when an informal sing along was held prior to dinner.
On Sunday at the academic sessions, Prof. Priyani Soysa was the Chief Guest. There were many alumni who had come from overseas.
Posted by Lucky Abey at 10:42 AM 1 comment:

"When a child is born"

It's not too early - Christmas is in the air already!

Medical Education – Then and Now

The following article was sent to me by Sanath on my request. Feedback in the form of "Comments" by viewers (both members of the batch and others who might read it, including those based outside Sri Lanka) would be much appreciated. Those viewers who may not be familiar with the commenting process are kindly requested to follow the instructions provided in a previous post titled "How to post a comment". You may even send in comments to my personal e-mail address: adnl1102@gmail.com. I will post them on your behalf.

The teaching consisted mainly of didactic lectures, practicals and anatomy dissections during the first two years; clinicals commenced in the third year and the didactic lectures and practicals continued. There were three end of course evaluations, namely the 2ndMBBS, 3rd MBBS and Final MBBS examinations. There was hardly any continuous assessment apart from the ‘Anatomy Spots’.


There was only minimal contact with the community except for a short family visit during the professorial paediatric appointment. Exposure to psychiatry or psychological medicine was minimal and it was not evaluated. Evaluation in paediatrics consisted of two questions in one of the two written papers in medicine and a short clinical examination.  We, the students were of the view that what was not evaluated need not be studied to pass the examinations. Therefore our knowledge of paediatrics and psychological medicine was rather rudimentary. Most questions of written papers were “essay type” and there were no MCQ papers. (Majority of us answered a MCQ paper for the first time, when we sat for the ECFMG examination after graduation)


Paediatrics was the first discipline to introduce a MCQ paper, at the end of the professorial appointment. Other disciplines gradually introduced MCQ papers. Paediatrics became a separate subject at the Final MBBS examination in the 1980’s. Together with the Department of Community Medicine (called Public Health during our time) the Department of Paediatrics started a family attachment so as to expand exposure to the community. However, the traditional curriculum prevailed up to the 1990’s and students were taught many conditions that were never or hardly ever seen - for eg. Chaga’s Disease, Sleeping Sickness etc.


During the 1980s the WHO recommended reforms in undergraduate medical education. Reorient Medical Education (ROME) was the theme. In the early 1990’s the Colombo Medical Faculty, which was one of four medical faculties at that time, decided to change the medical curriculum in keeping with the country’s needs. Several workshops were held with representatives of  other medical faculties, Ministry of Health consultants and administrators , general practitioners, representatives from Professional Colleges, The Sri Lanka Medical Council, GMOA, senior administrators such as the Vice Chancellor of  the University of Colombo,  members of the UGC etc.,


After much deliberation a “new curriculum” was introduced with the A/L 1993/1994 intake of students who eventually graduated in 2000. This was a major change and very staff intensive with both (old and new) curriculae running within the faculty during the period of transition. In later years medical faculties in Peradeniya, Kelaniya, Galle and Sri Jayawardenapura followed suit and initiated changes in their teaching programmes.


Several new and some even unique “streams’ “modules” etcwere introduced. Examples were  the Introductory Basic Sciences Stream (IBS), students  being introduced to clinicals during the first 2 years itself, Applied Sciences Stream (with a modular structure in the  3rd, 4th and 5th years) Clinical Stream, Community Stream and Behavioural Sciences Stream; the last three streams ran through the entire course. Clinical teaching that was introduced during the first year rapidly expanded during the next five years. First Contact Care was also another new aspect- and students were posted to peripheral hospitals and were attached to a General Practitioner, and a Municipality clinic.  (I functioned as the founder chairman of the Clinical Stream)


The Applied Sciences Stream initially consisted of 18 modules, dealing with different systems eg. CVS, GIT, CNS etc. Later, by joining certain modules it was reduced to about 15. Wherever possible clinical appointments were made to coincide with the relevant modules.


In the Community Stream, a family attachment was made mandatory; two students had to look after a family for several months and deal with their health and social problems. A research project was also made mandatory so as to introduce students to basic aspects of research, as this was considered to be very important for their future career in any chosen field.


During this stream effective communication skills, self-development, time management, team work and medical ethics were emphasized. “breaking bad news”, “caring for a dying patient” and “reducing conflicts in health care teams” were some of the other important components.


The final year professorial appointments were for 2 months each and psychological medicine was also introduced in to the final year.


It is a laboratory setting to allow learners to acquire skills which are embarrassing (eg. vaginal or rectal examination), painful (eg. catheterization), difficult (eg. suturing of an episiotomy) IV cannulation, funduscopy, otoscopy etc. These procedures are practised on models under supervision. Several modules and the Introductory Clinical Sciences Stream use it for teaching skills.


Didactic lectures and anatomy dissection hours were drastically reduced. (Prosected specimens largely replaced dissections)New methods such as Problem Based Learning (PBL) Integrated Teaching, Seminars, Small Group Discussions (SGDs), Computer Assisted Learning. Fixed Learning Modules (FiLMS) are used extensively. There are many student led assignments. The students are encouraged to do “self-study,” prepare reports and present these to their colleagues at formal teaching sessions. These methods, made the students to lose “stage fright” and develop public speaking skills and become good communicators, early in their career.


The clinical appointments in the new curriculum were similar to what we went through except for the addition of some new sub-specialities and aligning them with the module based teaching of the 3rd and 4th years. The final year professorial appointments were for two months each and psychological medicine was also included.


The basic principle was that whatever that was taught or a sample of it should be evaluated and given a mark. Continuous assessment was given a prominent place in contrast to “end of course” evaluation in the old curriculum. MCQs and structured essays are the hallmarks of written examinations. OSPE (Objectively Structured Practical Examination) OSCE (Objectively Structured Clinical Examination) are also used as tools of evaluation.


Psychological Medicine was made a separate subject for the Final MBBS examination from 1998 onwards. All this meant a huge exam overload as well as report writing, research projects, etc. At present .there are over 30 different evaluations adding to student stress. The Community and Behavioural Sciences Streams also have their final evaluations at the end of the course, adding to be students work load.


During the 2 months appointment in the final year, a continuous assessment mark of 40% was given in the new curriculum. Continuous assessment  was made as objective as possible based on their attendance, clinical presentations, written discussions, work place based interviews and OSCE’s; we even attempted to assess attitudes through an exhaustive mechanism. The final paediatric clinical examination was conducted at the end of the appointment with one long case and two or more short cases (30% of the final mark is given for it). At the end of the course at the Final MBBS examination two written papers are held (structured essay and MCQs) and 15% is given for each paper. In the near future it has been decided to postpone the paediatric clinical examination and for it to be part of the Final MBBS examination at the end of the course. This is mainly because a common order of merit has to be made for all the medical graduates from the different medical faculties for purposes of employment in the Ministry of Health. Therefore methods of evaluation have to be somewhat similar in all medical faculties.


As you can see dear colleagues, over the years, the medical curriculum has been turned “upside down and inside out”! As I was fully involved in this very tedious process, I am convinced that it is for the better!