I was very happy to receive this e-mail from my old friend Razaque Ahamat whom I knew was not in the best of health. You will see that Razaque has retained his sense of humour despite his ill health. I felt that our batch colleagues too would find it interesting - to know how he is doing in Scotland and about his family. As a matter of policy, I always get the writer's consent before posting personal e-mails on the blog. Hence the delay.

I met Razaque in June 1961 quite some time before I got to know the rest of the batch in the Colombo Medical Faculty the following year. Along with me, he was one of 15 students who had entered the Science Faculty at Thurstan Road to follow the 6 months course in Chemistry. Incidentally, others from our 1962 batch who were in that 1st MB group were: Zita Perera, Cyril Ernest, Puvan Ramalingam, Ranjit Kariyawasam and V. Kunasingham. We soon discovered that both of us had probably been in the same class (Standard 3) at St. Anthony's College, Wattala as well, way back in 1948. I last met Razaque when he and Farina visited my home during one of his trips to Sri Lanka in the eighties.

It has been a long time since you all heard 'from me' or 'of me'!!!It has been a very turbulent year or so for us...AGAIN.
In May I went down with a severe attack of Pneumonia and was rushed to hospital in a delirious state with slurring of speech,weakness on one side and a temperature of 43.5 C..!!!
Investigations confirmed Pneumonia and a Brain scan .....showed that there was NOTHING THERE!!!! not surprised eh???
The very next day my son , Hajirin had severe abdominal pain....not pregnant!!! and was also rushed to hospital and was operated on as an emergency. It was a very anxious time till the biopsy report came as Diverticulosis. He still has not gone back to work and it will not be a long time....though he is impatient!! He was in hospital for more than 3 weeks. In the
meantime I was discharged after 2 plus weeks.
Two of the same family in hospital at the same time with conditions that could have gone either way!! Also, you might remember in 2009 my wife, Farina and I had very major Cardiac surgery 6 weeks apart. This seems to be a habit with us!!!
Anyway, I seem to have cheated "the Arch Angel Gabrial/Maraya/malakkal mowth more than once---next time not so lucky??

A little bit of news of my brood---- They have now obtained Membership of their respective Royal Colleges--Physicians, Psychiatry and Dental Surgery and appear to be progressing okay!!!

Wish you all the very best for the REST OF YOUR FUTURES.
Posted by Lucky Abey at 3:06 AM 4 comments:

Email ThisBlogThis!Share to TwitterShare to FacebookShare to Pinterest
Labels: Letters

I turned 72 last Tuesday. This is a picture taken that day in the company of my grandkids. Note the "New Look"! 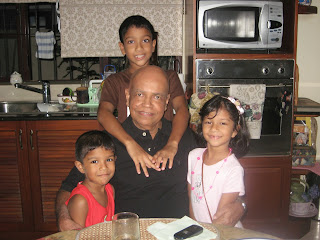 Email ThisBlogThis!Share to TwitterShare to FacebookShare to Pinterest
Labels: News

On Saturday 12th October,  the Sri Lankan Medical & Dental Association UK held its 31st annual dinner dance at the Radisson Blue Edwardian Hotel in London near Heathrow. It was an occasion where 5 batch mates met,  some after a very long time. It was a fantastic occasion and it was great to revive pleasant memories. 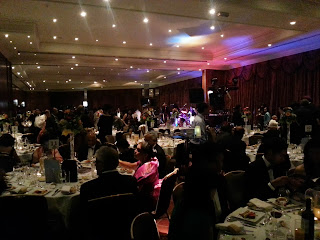 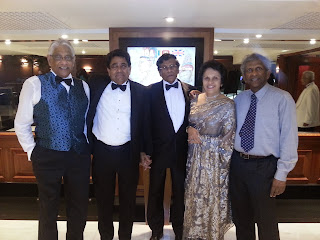 Email ThisBlogThis!Share to TwitterShare to FacebookShare to Pinterest
Labels: News

The Colombo Medical school, now known as the Medical faculty of the University of Colombo, is 143 years old and the second oldest in Asia. Sri Lanka has eight state medical schools with around 1,500 qualifying as doctors every year. In addition, every year, about 300 doctors with foreign degrees qualify to practise medicine in Sri Lanka. The PGIM (Postgraduate Institute of Medicine) of the University of Colombo established in 1980), trains medical graduates to specialise in all fields of medicine.

The Medical School in Colombo initially had a traditional training programme with two years of the basic sciences (anatomy, physiology and biochemistry) followed by paramedical sciences of pathology, bacteriology, pharmacology, forensic medicine and public health before clinical hospital-based training in clinical medicine, paediatrics, surgery, obstetrics and gynaecology. Now the medical school has an integrated modular format with facilities for self-learning.

The oldest building in the faculty is the Anatomy building built in 1815 on Francis Road next to the JMOs office. The other buildings (Physiology, Biochemistry, Pharmacology and Pathology) are in a cluster with entry through the main entrance on Kynsey Road.

The other buildings on Kynsey Road include the original administrative block, the Soysa Maternity hospital donated by Sir Charles Henry de Soysa and the Institute of Neurology built entirely from public donations with the leadership provided by the senior consultant neurologist, Dr. J B Peiris. The Colombo medical faculty has no residential campus though it has a few male and female hostels. The alumni, who were initially awarded the diploma of LMS (Ceylon) and later MBBS Ceylon, obtain the qualification of MBBS (Colombo) on successfully completing five years of training.

In the two years the CoMSAA (Colombo Medical School Alumnus Association) has been able to achieve much with the help of its local and overseas alumni. The achievements of the CoMSAA includes:

- A Donation of books worth Rs 2 million to the library from 4 of its US based alumni
- Computers worth Rs 500,000 by a US alumnus
- A donation of Rs 500,000 by a non-medical professional, to the best achiever at the basic sciences examination — equivalent of the second MBBS. The donor preferred to make a donation which would help a future icon of the alumni rather than a needy student
- A donation of five computers and network printer by the class of 1958-63 who celebrated the golden jubilee this year
- A donation Rs. 396,000 from the class of 1968- 1973
- A donation of Rs. 135,000 from the class of 1963-1968 following the celebration of the Golden Jubilee of entry
- The founder president and his committee arranged for a donation of a piano, billiards table and TV for the common room, which is now a uni- sex common room.
- We have obtained and approved a reasonable quotation to repair the leaking roof of the Women’s hostel which is in a terrible state
While collecting funds is of paramount importance, proper and adequate utilisation of such funds is equally important. CoMSAA has earned a reputation of being the most important and trustworthy investment portal for alumni both locally and overseas.
We have stressed the need to support the alumni and future alumni in these ventures.
FACILITIES FOR MEDICAL STUDENTS
- Two grants of Rs. 50,000 to students to present their research at an international conference in the Netherlands
- Five grants of Rs. 25,000 each for students to compete in the International Quiz contest in Physiology in Malaysia
- A piano, TV and a multimedia projector for the Common room

While the executive committee of CoMSAA has been active it has had the support of the Dean, Prof. Rohan Jayasekara, who has been helpful with the channeling of the donations. CoMSAA has also had two successful international congresses and reunions which has stimulated further service oriented activity.
Posted by Lucky Abey at 7:55 PM 4 comments:

Experiences with an Interpreter


We all respect experienced doctors, teachers etc. I would like to tell my experience with an interpreter. At that time I was working in a missionary hospital in Ondo state, Nigeria. Ondo state was 2/3rd the size of Sri Lanka and in late seventies, there were only two hospitals for the whole state - a state hospital and the missionary hospital.


I had an interpreter as I had no knowledge of the local language named “euroba”. His name was Emmanuel but fondly called Manuel. He was a taxi driver but unfortunately lost his whole left arm during a car crash. So the Irish nuns who were in charge of the hospital had employed him as an interpreter. His knowledge of English language was very good. His job was to interpret for me and to keep a record of the name, age, sex and the diagnosis of the patient.


One day I saw a child with swellings of interphalangeal joints resembling rheumatoid arthritis. So I told Manuel that the diagnosis is juvenile rheumatoid arthritis. Manuel looked at me and said madam in your country that may be the name, but in Africa we call it sickle cell arthritis. I have never seen a sickler before and when I looked at the child’s old notes it said that he is a sickler. Then I knew that Manuel is correct. So I told him to write sickle cell arthritis.


Another day an old man came with dry gangrene of his little toe. I looked at Manuel and said that the man has dry gangrene. Tthen he said yes, it is an ainham. I have never heard of this diagnosis and I did not Know the treatment. So I told Manuel that I will write some medicine. Manuel said yes a pain killer would help him, otherwise nothing should be done as it falls off on its own. So I read my Baily and love as soon as I came home and there it was in small print.” Ainham” a dry gangrene of toe specifically found in Africa and it falls off as Manuel said.


The patients who come to the OPD stay seated on benches till their number is called. Manuel had the habit of bringing ladies out of the queue. At first I thought they were known people to him but he said no, I am bringing ladies whom I think has ectopic gestation because if they wait in the queue their condition will become worse. Everytime I examined them they all had ectopic pregnancies. I was puzzled and I wanted to know what makes Manuel to suspect them as ectopics. So I asked him. His reply was that he notice them because they look pale and sick so he goes and asks them about their periods and bleeding PV.


Then he used to call men out of the queue telling me that they have tetanus. When I examine they do have tetanus. Again as a reply to my inquiry he said that he notices their walk which is very stiff and then he suspects tetanus.


Also Manuel had the habit of walking to the wards when I am having my tea. One day he told me that the house officer is treating a child with meningitis as malaria and he wanted me to check. As usual manuel was correct. So the lesson I learnt is to respect even your interpreter’s experience.
Posted by Lucky Abey at 8:35 AM 2 comments: