This is just a request from members of my Colombomedgrads1962 batch. I would like to make this a regular feature on this blog. I want each and everyone out there to contribute. What you send me can be any noteworthy achievement (professional or otherwise) ranging from a newly acquired professional qualification to anything that you have done for fellow human beings. Or it can be something in your personal life that you would like others to know. It can even be something that your spouse, child or grandchild has done. Or even the loss of a loved one. Surely, nothing is too small to be shared with your colleagues. This is our own blog! It's meant for that. However, in making your contributions, please don't lose sight of our main focus - that we are zooming in on our 50th Anniversary. This is all a build-up towards that.

It's best that you send such news and information in concise form to my personal e-mail address in the first instance. It is:
adnl1102@gmail.com.
Big or small, it will be published after an initial dialogue (if necessary) with the sender.
I am sure you will appreciate the fact that I cannot keep track of all such achievements and news of some 160 members in the batch.

As an example, I picked up Sanath Lama's achievement in being elected SLMA President in 2011 and posted it as a news item. I would rather get you all to send in such information voluntarily.

Who would like to volunteer first? Please don't be shy and too modest.

Lucky
Posted by Lucky Abey at 8:27 AM No comments: 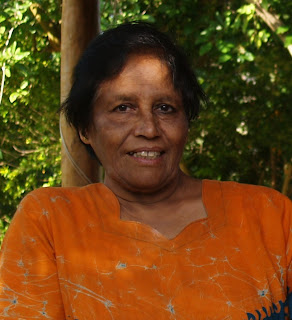 Anna Sathiagnanan (nee Ponnambalam) was fondly called "Anna Marie" after the song of the same title made famous by Jim Reeves in the sixties.  She passed away on the 13th of March, 2011 after a prolonged illness.
I first met Anna in June 1962 when we entered medical school.  She came from Methodist College while I was an entrant from Visakha Vidyalaya.  As medical students, we used to travel in the same direction after lectures.  Later, I had the good fortune to share a room with her at the women’s medical hostel.
I will never forget the way she used to bring my daily morning coffee unfailingly at 6 am each day, all the way to the 4th floor from the ground floor.  She looked after me like a sister and encouraged me to study. She was an accomplished violinist who kept us entertained, playing her favourite musical instrument in the room during leisure hours.
In her professional career, Anna worked mostly in Zimbabwe (1976-2004) at the clinic on Aberfoyle tea estate, where her husband Gnanamuthu Sathiagnanan too worked. She moved on to working in the Infectious Diseases hospital in the nearby town, and after a few years, set up her own practice as a GP.  She also worked at a mission hospital in Lesotho from 2004 to 2006. After her husband passed away, she moved back to Sri Lanka in 2007, where she continued to work at Navajeevana until she fell ill in early 2010.

They were the parents of two lovely daughters who looked after their mother devotedly during her last illness. Anna was very fortunate to have two daughters who sacrificed a lot to be with their mother and look after her during those final difficult days.   With her demise, I have lost a very dear friend and a good companion.

Anna's family hopes to take her ashes back to Mutare to scatter and have a memorial service for her in August.
Kusuma Jayasuriya Ruberu
Posted by Lucky Abey at 10:10 AM 1 comment: