Hello Everyone,
I am pleased to send you this update with more details about the upcoming 50th Anniversary Reunion of our batch.
The Organising Committee met on Wednesday February 22nd and made the following decisions:

Dates: Reconfirmed as August 31, September 1 and 2.

Those who wish to attend should confirm attendance by sending me an e-mail as early as possible, but not later than May 31, 2012. Please also indicate whether you would be accompanied by your spouse/family member/other. You are welcome to request more than one room provided the applicable rate for the extra room is paid.


By the May 31st deadline, we will know the total number attending and will then make the necessary reservations at Chaaya Tranz (you won't have to worry about hotel reservations). Each attendee will have to settle the hotel bill when they check out on Sept 2nd.
Other charges
It is to be noted that the above rates are for room charges and full board from lunch on Friday Aug 1st to breakfast on Sunday Sept 2nd (two days room occupancy). Apart from that, every overseas attendee is expected to pay US $ 70 each. For local attendees, this charge would be Rs 7,000 each. This amount has to be deposited in advance in a special bank account, details of which are as follows:

This extra payment is to meet the cost of transport, wine, beer, corkage, soft drinks, chasers, music, photographers, tips etc. This arrangement will ensure that no participant/attendee will have to spend on anything other than personal items such as laundry phone calls etc. during the entire Reunion.

Hard Liquor
Cost of hard liquor is not covered by the extra charge of US $ 70 / Rs 7000. Therefore, voluntary donations of a bottle or more of any of the following would be much appreciated.

Transport
Participants will meet at a spot in Colombo early in the morning on Friday August 31st to leave by coach for Hikkaduwa (exact time and meeting place will be notified later). Donations of hard liquor would be collected as the participants enter the coach after loading their baggage.

Anyone who wishes to come to Chaaya Tranz using their own transport will be free to do so. They should inform the orgnisers in advance.

Academic Program
An academic program in the form of a medical seminar is scheduled for Saturday Sept 1. Any volunteers who wish to make presentations (on any medical topic of your choice) should notify the organisers before a date to be specified later. They will be provided wth details later.

Please make it a point to visit our blog frequently. Click on:
http://colombomedgrads1962.blogspot.com

If you have questions, please feel free to write to me.

The souvenir that was published in conjunction with the Habarana Reunion in 2007 carried many  pictures from past Reunions. However, you may or may not have seen this group picture from the very first Batch Reunion held at the Holiday Inn in December 1986. 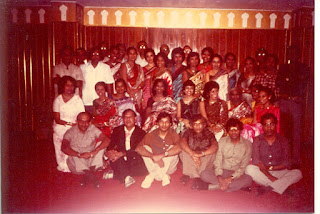 These are other pictures from the 1988 Reunion that was held at Hotel Lanka Oberoi, but were not published in the Habarana Reunion souvenir. 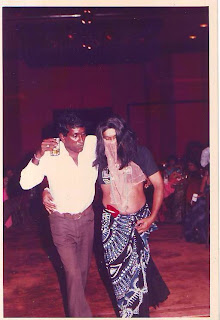 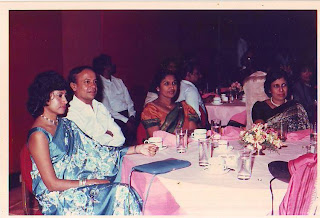 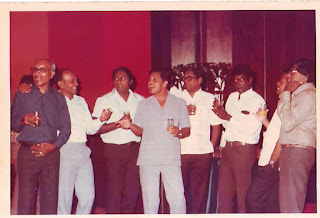 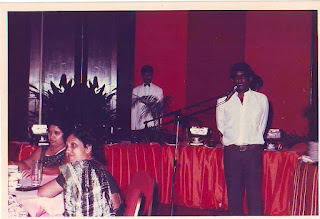 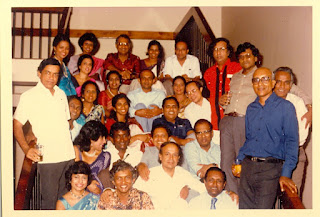 My Auntie Cedent was really the Boss
To understand why, you may be at a loss
She always preceded my Uncle Jerk
Just like my beloved Auntie, Cipation
But for many, there was no such perk

In Syphilia, Uncle Jerk could disappear completely
But in close by Cord Compressionia surprisingly
Uncle Jerk becomes highly exaggerated and brisk
But sadly his stiff legs made safe walking
Tardy and a matter of considerable risk

Now, Mr Hema Roid the famous surgeon
Specialised in matters affecting the nether Region
Very versatile and talented was he
Equally at home with ligation or injection
As with staples and complete resection
Posted by Lucky Abey at 9:37 PM No comments:

When "Home Sweet Home" is Sweeter

Mid pleasures and palaces though we may roam,


Be it ever so humble, there's no place like home!

Posted by Lakshman Abeyagunawardene
(This appeared in the Sunday Island of 16th October, 2011)
Posted by Lucky Abey at 3:02 AM 1 comment:


Med school in sixty two, a deceptive gilded doorway
In my innocent years of 22, from posh C7 boys
I’d slip away

In their eyes, I was invisible,
While I was truly in awe
Of this strange mix in the crucible,
Where we’ll spend five years or more


To most the Block was heavenly bliss
Not withstanding biochem, anatomy and phys
We sat bemused and enthralled


While Profs Koch, Hoover and Carlo installed
Facts stranger and stronger than fiction,
Blurred but encased in good diction!


Lab experiments in an hour
But can we go first to the tea bar?
Counting money like a kid
(It’s for the whole week, this quid)


The best part was ‘Block Dance’ yearly
J brothers, songs, nothing went waste
We loved the music and acts clearly
Although some jokes were not in good taste


3rd MB and we were all ‘eyes and ears’
Composed and listening to Path Cooray
All Through our youthful years
We took in Inflammation, Gangrene and Decay


In our brains was there space?
For ward classes on hip joint and knee?
In this Path, Bact,Pharmo haze
First Change to Superman, and see!


For in Medicine it’s the brain you use and in Surgery?
The hands to do the task!


Oh those days of nervous anticipation
A cherished dream or was it a nightmare?
We were in suspended animation
Looking back, did we really care?

The Day is here when results are due
Most celebrate but for a few
Things have gone a bit awry
(For someone stood between him and his dowry!)


Good bye, farewell, Good Luck, Sleep well!
We are all in the Seventh Heaven
For it’s here! The year Sixty Seven
We’ve since had a life of Fantasia
Whether in LK, UK, Ca or Australia